When I arrived in Airton 2 years ago complete with a brace of young Bramley apple grafts ready to plant where I could find space, doubt was expressed that they would ever produce much of a harvest this far north.  Still waiting in their pots, it’ll certainly be a few years before they have the chance to prove their doubters wrong; but if the bumper crop from a neighbour’s Bramley after this year’s long hot summer is anything to judge by I’ll have nothing to worry about. 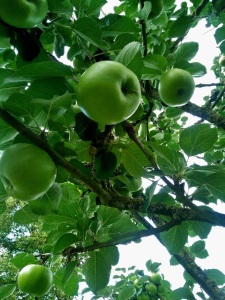 It’s definitely a mast year for fruit: apples, plums, berries of all kinds seem to be pouring out of the trees faster than their proprietors can sweep them up.  I spent a day last week scrambling around in the branches of the aforementioned Bramley twisting handfuls of emerald spheres off drooping twigs, the boughs almost sighing in relief as perhaps a third of a tonne of weight was taken off them.  (That’s an educated estimate – six large crates easily equivalent to most of a m3 dumpy-bag at a material density of around 830kg/m3 or allowing for air assuming apples are roughly spherical hence don’t tesselate, maybe 400-500kg/m3 stacked, times by say ¾m3 for the actual quantity picked gets you to about 350kg).  So numerous was the crop I started to form the delirious impression that the branches were growing new fruit whenever I looked away…
It was a scene from my childhood. Growing up in a mid-size semi-detached with a garden of what used to be standard proportions (sadly rare to non-existent for newer housing estates) one of my favourite features – indeed as far as I was concerned the only interesting feature of the garden – was the apple tree: a remnant of some long-forgotten orchard supplying the kitchens of the long defunct estate, broken up and sold to the city early last century when the local gentry’s fortunes fizzled out.  Neglected, the tree grew with a Bramley’s customary vigour till it filled the top end of the garden, stretching its boughs from fence to fence and thrusting branches skyward so that by the time we colonised the garden in the mid-70s it rivalled the house in the volume of space it occupied.  When the old garden appears in my dreams from time to time it’s always with a version of this gnarled old bent-bottle tree stooping low over the lawn and seeming to offer the choice between climbing it or felling it.

Climbing as far into its upper reaches as I dared was the highlight of the year – usually somewhat later than the end of August, but this year’s extreme summer has brought everything on early – tossing the blushing green spheres to my dad on the ground, filling bag after bag, dropping the odd one or ten, so that half of them would end up bruised or cut by whatever broke their fall.  It might go into a second day… and then was the sorting into best’ns for keeping, good’ns for using soon, damaged or moth-eaten for this week and no-hopers for the compost.  After that the wrapping in newspaper, laying in shallow cardboard boxes and stashing in the attic.  Then for the next several months it would be my job to fetch the next few for that week’s culinary creation till the supply finally ran dry early in the year.  Sometimes in the dark of the attic my hand would rest on something softer than a healthy fruit – a ball of speckled brown mould where once was an apple.  I didn’t mind: the promise of the crumble or apple sponge to come would make any such jeopardy worthwhile.
I took scions from the old tree before it finally gave out to heart-rot, grafting a handful of new offspring, giving them to family in various parts of the country.  Then again a few years ago from the one I kept and had planted in my own garden.  It’s these grandchildren of my old Bramley that now sit in air pots waiting for their chance to put roots down in our northern soil.  They will be smaller – I used M26 rootstocks this time (the smallest I dare for this variety of apple) but after this year’s abundance I’m confident they will eventually produce a good crop between them.
At the time I was first hoiking myself up into that old tree I would have had no other thought than ‘this is fun’.  But in retrospect the years of harvest in that garden gave so much more than arboreal adventure and apples – it was this urban kid’s first and most important connection with the abundance that can come from partnership with the natural world.  Without that tree I mightn’t have half the passion for nature that I do now nor as a consequence, the same understanding of our role as components within ecosystems, interacting with all other components for better or worse.  We don’t own the world; we don’t even own the trees in our gardens – but we do own the way we manage them, how we celebrate them and what we do with their abundance.  So here’s to Bramleys, long summers and apple pies!

This entry was posted in food, reflections.